Outcome of my Travels

Well, I know you are all waiting with bated breath (hahahaha! - Sorry, did I laugh out loud?) to hear about my trip to the mid-north. So without further ado, let me launch into Boring Travel Monologue #1.
In between the actual work which I had been sent to do (which I did do, but I'm not going to write about) I squeezed in four cemeteries, 1 pioneer garden, 1 church, 1 family history society, 1 museum, 1 railway  station, 1 gaol and 422 kms. Only 1 winery, and that was because it's attached to the church (gotta love the Jesuits!) Happy with that. I also brainstormed a pile of memes to make for the blog, so all in all it was a pretty productive few days.
On the way there I stopped to pay a courtesy call to my 4x great grandparents, George and Mary Darby, who are interred in the Riverton Cemetery. They are buried close by to their daughter Annie, who for some reason had her maiden name used on her headstone even though she was married. Very weird, especially since her husband was a B-grade celebrity. 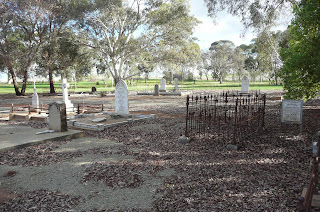 Probably the only time a family history researcher has driven into Riverton Cemetery with Limp Bizkit's "I did it all for the Nookie" playing on their ipod. Loudly.﻿

I also visited another of their daughters, Elizabeth, who is interred in the old cemetery. It has since been redeveloped as a pioneer garden (I fucking hate that - especially as a celebration. Yay, the state is 120 years old, let's celebrate by desecrating the graves of our pioneers! What a great idea! Fucktards.), but luckily hers is one of the stones which has been retained. While I will never know the exact spot she lies with her newborn son, at least I could see her tombstone <insert rant about sacred sites here>. I then spent Day 2 in planning. Of course as genealogy synchronicity so often has it, that same day I received an email from another of the Darby descendants who is planning a trip to Pitney, their original home. Always funny how that happens!

Before checking in at the hotel I also went to the Clare Museum, on the lookout for my Lavis related family history mysteries. The volunteer there was extremely helpful and dug up the Maynard family history book. Unfortunately the book's author knew about as much as I did, and had even omitted any reference to the Bigamy Incident, so no joy there. Although there were many Maynard related things in the museum, nothing further could be found about the Lavises.

Day 3 I went to visit a site which is of family and local history significance, the Sevenhill Winery/Church/Cemetery. It's the oldest winery in Clare, was once host to St. Mary Mackillop, and is also where her spiritual director, Fr. Tappeiner, is interred. It's also a place where some of my husband's family, the Fudges, worshipped and were interred. I went on the walk hosted by the exceptional Br. John May, former head wine-maker of the Sevenhill winery. One of the stops we missed but which features in the walk booklet is the World Youth Day cross. In the booklet it makes it sound like it is the actual World Youth Day cross which is up in the Radiata Pine grove, but the WYD cross carries on its journey the following WYD, so I'm not sure exactly what it is that's up in the grove. If it had been the actual cross I'd have taken the time, as the cross and icon are very special to me, but I was a bit too busy for replicas and commemorative models.

Day 4 was pretty action-packed. When I was doing the dog-leg to Riverton I realised I was going to be not-a-million-miles from Burra and Hanson, which are also areas of importance to the family, so Day 4 I hit the road (again) and went out to Burra.

The first stop was the cemetery. There are a few married-into-the-family types who are interred there, but I must admit I completely forgot about them in my hurry to see one very special person: a four month old baby named Mervyn Clifford Dawson. 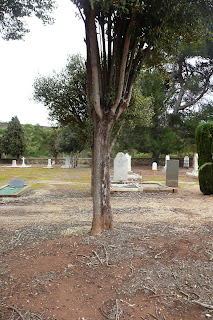 Mervyn is my great-uncle, and he's definitely my Sad Story #1. Mervyn was the son of my great grandmother, Ethel Gladys McPherson, and someone... maybe my great grandfather, but probably not. Although her family lived in Hanson (about 12km from Burra), he was born in Alford. She was probably sent to stay with family to hide the shame etc. etc. because Glad was not married at the time (Yes, they'd have a fit if they knew I was stating this on public record, and no, I don't give a fuck. Ethical considerations are good and all, but they shouldn't have to be ashamed about that beautiful baby boy.) Four months later, Glad was back with the family in Hanson. In August Mervyn died of pneumonia, and his death certificate refers to him as the son of William John Dawson, who was Glad's father. Glad was the eldest daughter, so it's pretty obvious that Mervyn had been passed off as her parents' son. They'd had their last child the previous year, so it was probably a fairly convincing story to Burra folks. I doubt anyone in Hanson believed it.
Like most family historians I am beset by babies who were taken from us all too soon. However, Mervyn troubles me for a number of reasons.
I checked first with the wonderful folks at the Burra History Group, and their VERY helpful president Meredith sent me a mud-map of the cemetery plus directions for where to find the map AT the cemetery so that I could locate Mervyn's grave. He is buried in a section where very few headstones remain, but by a stroke of extreme good fortune he is buried on the intersection of two pathways, which made his site miraculously easy to find (some of that genealogical serendipity that strikes from time-to-time). I sat alongside Mervyn and had a thoroughly good cry for quite a long time. I am happy to have had the chance to visit him. I was probably the first family member to visit him in some 60-odd years, and also probably the first to visit him with full knowledge and acceptance of the circumstances of his birth. I left him a toy car, and continued somewhat regretfully on to the next stop.
﻿ 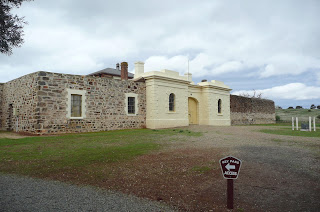 Most people who go to visit Redruth Gaol are there out of interest in its role as the prison in what was once SA's largest country town, its history as a girls' reformatory, especially the infamous riot which led to its closure, or ghost hunting. However, I visited because my great-great grandfather Edwin Francis Gough was once the 'turnkey' there, and was sacked in 1864 after allegedly assaulting a prisoner. While he appealed the matter and it ended up in a parliamentary hearing, he was not successful and ended up applying for a store license in Moonta the following year. It was the beginning of a major decline in the family's fortunes, no doubt the subject of a future blog entry!

Burra is a small place, but I had two more important stops: the Burra railway station, where my great-grandfather probably once worked as porter, and the surrounding suburb of Aberdeen where my grandmother was born almost 100 years ago. Unfortunately I missed taking pictures in Morehead Street where Mervyn died or of the Methodist Manse on Jessie Street where my great-grandparents married. Maybe next time.

On the way back to Clare, I stopped in at Hanson. Hanson was the residence of the Dawson family for several years, including the time that Mervyn was born and that my great-grandmother Glad met and married Francis McPherson. My great-great grandfather William John Dawson taught the local school and was noted in the area for his enthusiastic support of the Belgian Relief Fund during the war years. There isn't much there any more, but the Methodist Church still stands along with a few houses. I don't know to what degree my ancestors worshipped in that Church as it was Wesleyan Methodist, and Glad chose to get married in the other Methodist Church in Burra. 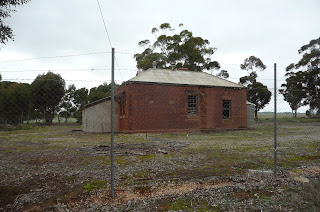 There's also this building... looks like a schoolhouse to me!﻿

On my last day in the Clare Valley, I stopped into the Clare Family History Group. They have some wonderful resources, and I definitely want to go back another time to check their Northern Argus indexes and land records. However, the volunteers (including the lovely lady from the museum!) were busy with older visitors and I wasn't able to get much help locating anything useful. I did find the school register for Hanson, probably written by my great-great grandfather William John Dawson, but no light on the Martin/Maynard/Lavis/Wiseman conundrum after all of that! :(

I did deliberate about a more extensive stop in Tarlee on the way back, but scrubbed it out in favour of getting back to the two littlest twigs of the family who I knew would be keen to catch up again. After all, the Tarlee school has been there for over 100 years, so it will probably still be there next time I get the chance to go to Clare! I also didn't get to Terowie, where my great-uncle Ron was born.
All in all, it was a quite successful trip. I didn't solve any of my mysteries, but I did do some other things which needed to be done, and still got my work done to boot. 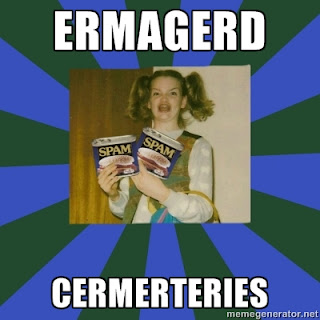