Why you should order certificates - employment information

I've mentioned previously that I have some rather significant brick walls with my mother-in-law's family. That's right, the woman whose grandparents are surnamed possibly James, unknown, unknown and Smith. Her paternal grandmother, possibly surnamed James, married William Taylor (who was definitely NOT her grandfather), and then Walter Herbert Russell, who I mentioned I'd had no joy tracking down.

When doing family history on a budget, it's easy to omit ordering certificates. The information such as names, dates and places can sometimes be located elsewhere, so all you're finding is detail, right? Well, on Elsie and Walter's wedding certificate, one of the details I had discovered about him was that he was working as a Ganger, which could mean 'a foreman of a group of labourers', or possibly a rail track worker. 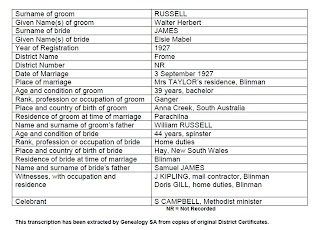 Now, many of the details on that certificate are inaccurate, as it common to any document linked to Elsie (or, as I prefer to think of her, liar-liar-pants-on-fire.) However, I was working from the assumption the employment was accurate, having been provided by Walter rather than Elsie. This lead me to consider he might be a match for an electoral record on Ancestry for a Ganger living in Rodinga, NT in 1937. I'd always suspected the marriage had collapsed, but had been searching for him in NSW where Elsie had briefly lived. This prompted me to turn my attention to other states and the NT.

While I couldn't locate him in any other NT records, I did find a WA record for a Walter H Russell who died in 1945. There was no evidence to particularly suggest it might be him, but there were no other records even close to matching so I thought 'what the hell?' and sent away for the certificate. This is what came back. 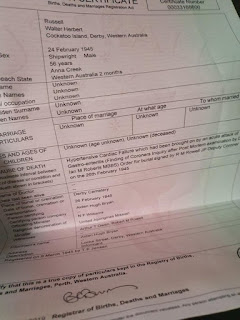 A funny thing: I've never received a certificate with more unknowns, yet this has told me exactly the bits I needed to know. He was 56 and born in Anna Creek, so definitely my guy! It also tells me all the things I didn't already know, his illness, death, and burial which was witnessed by local Kimberleys identity Robert Rowell. It also explains why nobody seemed to know what had happened. Even now, that is a very remote part of Australia, let alone in 1945! Having been born in Anna Creek, a highly remote part of SA, Walter probably felt right at home, but it sure makes a man hard to find! 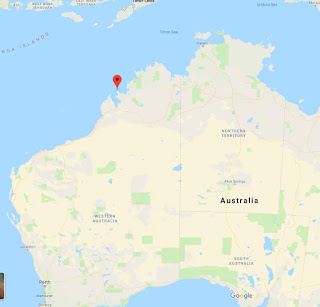 Cockatoo Island, death place of Walter Herbert Russell. I'd tell you how far that is from Anna Creek, but Google won't calculate it because it's apparently just too off-grid!! Maybe 2400kms/1490mi?

So, there you go, order those certificates and find answers in the obscure details. One slight obscure-detail question though... two children, one deceased? I only know about one of those! More questions!!!