Once upon a time I thought my great-grandfather was going to be my perennial brick wall. We all know about Irish records, right? I love the heroes of the Easter Rising to bits but I'd love to slap each and every one of them silly for burning all those wonderful records in the Four Courts. I'm partially right: I still haven't got any further back than his parents and siblings and working out he almost certainly was a young nationalist fleeing conflict, which had always been my suspicion. 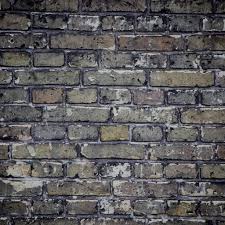 An early photo of Great-Grandfather Patrick McDermott, taken just after his arrival from Galway.

However, it turns out since I married and begun delving into the in-laws' family, that in fact, my biggest brick wall is actually hubby's mum's family. They have presented so many obstacles that I have dubbed that line the Brick Fortress and all but given up on ever finding a solution. In fact, I have even started assembling questions to put to the Genealogy Psychic, I'm that desperate for a lead! I know, right?

So, here in no particular order are the problem people:

1) Her mother, Sheila May Smith.
Yep, Smith.
Daughter of Nellie Smith and... who? Nope, we don't know.

Column 4... Thanks a fucking bunch

Nellie Smith has proven elusive, connections to any Stanleys have been untraceable. I do know that Sheila changed her name in 1940 and that the paperwork was witnessed by her future brother-in-law, William Taylor. MIL has not shed any light on any of it and seems to have been happy to live in ignorance about her grandparents (which, frankly, I find hard to believe given she is Mrs. Nosy Questions!) 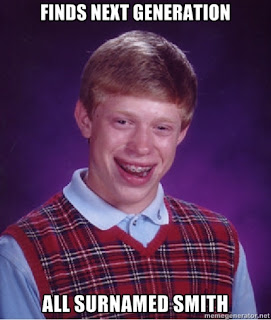 But Smith, that's something to go on with... right?

2) Her father, Kenneth Taylor.
His mother was Elsie May James. According to the records, she was born in Blinman, or Hay, in 1883, 1887 or 1890. There are no SA or NSW records even close to being her. You get where I am headed here... Elsie's unreliability with her personal information has made her very difficult to trace. One record says her father's name was Samuel, so that's the main thing I've been working on.

There are some records relating to an Elsie James, daughter of Samuel, but these are for Elsie Alice James in 1886 in Fitzroy, Victoria, daughter of Samuel Arthur James and Alice Cleak. There is an article in the paper in 1900 where Samuel A James of Warragul refers to his daughter's recent awards in music (West Gippsland Gazette, Warragul Guardian). Warragul is an hour and a half from Heyfield/Sale, the significance of which will become apparent later in this post. The general correlation of facts (father's name, approximate year, recurrence of the name "Alice" in our family) leave this at the leading possibility for our Elsie's birth, which of course leaves us with the question about why she just didn't provide that information?

Then of course there's the issue of Kenneth's father and step-father.

The step-father first: at her second marriage in 1927, Elsie gave her name as James, but the wedding was performed at Mrs. Taylor's residence. She married Walter Herbert Russell, who I believe was probably the one born at Anna Creek in 1888. The couple had one child, Colin. She then apparently moved to Broken Hill, became widowed and later returned to Blinman before following her children to Adelaide. What happened to Walter Herbert Russell? Who knows! No, I'm serious - who knows? I'd like to find out! However, what happened to him is nowhere near as mysterious as the issue of Kenneth's father.


Scandals and Suicide in the Scrub
When I first heard anything about Mr. Taylor, it was from one of my mother-in-law's cousins. She said his name was William, and she believed he killed himself. I subsequently discovered that according to his children's birth records, he was born around 1877 in either Sale or Heyfield, worked in the Blinman area, had 6 children in 1916 and had died by Jan 1922 when Kenneth was born in Adelaide. Prior to his death he had been a station manager.
Those of you who know your SA geography will know I'm talking about a very remote part of the state which is fairly sparsely inhabited, so when I struggled to find William in Victorian records and couldn't find likely deaths in 1921, I did the sensible thing and searched Trove for likely matches - 'Taylor AND Blinman', that sort of thing. And what did I find? A whole pile of articles about this incident here:

This sounded quite a likely match up for our William, so I set about finding out as much as I could about the case and the William Taylor involved to see if he was our guy.

William Thomas Taylor was born in Sale around 1877. Tick. He started an affair with Mildred Maud (Milly) Roberts who had been born in 1896 in Blinman. She was the governess at Angorichina Station (in the Blinman/Beltana area) where he worked as a station manager. Tick. This was highly scandalous as he was married, and had six children. Tick. The couple caught the train south, got off at Whyte-Yarcowie, walked to the edge of the scrub about three miles from town and committed suicide by swallowing strychnine on the property "Greens", owned by John Hale, who knew Taylor from previous station work. The police buried the bodies in an undisclosed location on free ground in the Terowie Cemetery. The family were not recorded on his death certificate but are alluded to in several articles, and the fact they refused to claim his estate would seem to suggest they no longer wished to be associated with him in any way.

You've all worked out the problem though, I know. Kenneth Taylor was born in 1922. This happened in 1916. Either that's the world's longest gestation or Elsie James told a BIG FAT LIE when she said William Taylor was Kenneth's father. I'm afraid that I'm going with the latter as the most likely, applying the Sherlock Holmes principle that "when you have eliminated the impossible, whatever remains, however improbable, must be the truth". I know Elsie was unreliable with personal details. I know there was a huge gap before Kenneth was born. I know that she gave birth in a city 100s of kilometres from her normal place of residence. I know that the exact location of his birth was a hospital which primarily served single mothers. I know that William Taylor, husband of Elsie, bears far too striking a resemblance to William Taylor, lover of Milly Roberts.

So who is Kenneth's dad? Well, she didn't marry Walter for another five years, so I'm guessing it's not him. Who else could it be? (And how long is a piece of string?)

Who knows, maybe one day hubby's DNA test will shed some light on the whole situation! In the meantime, it's back to the fortress! 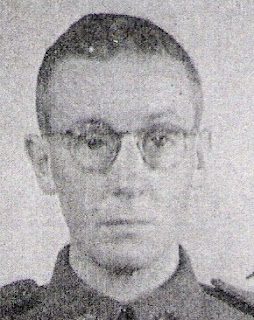