September 29th, the Feast of St. Michael the Archangel, is also National Police Remembrance Day in Australia, commemorating the lives of officers who died in the line of duty. I have a few police in my family, most notably Thomas Skermer, International Man of Chicanery. Thankfully, the rest were nothing like that at all, and today always makes me think of one of the 'good guys', Walter John Wissell.

Walter Wissell was my 1st cousin 3x removed. He was born on 11 Apr 1881 in Echunga, the area where most of his family lived including poor dear Nellie Cunningham who was Wissell's first cousin. His father James had a dashing backstory, as he is believed to have served in the US Civil War before starting a career in whaling and jumping ship in Australia. James married the young widow Janet Brown nee Gall in 1867 and the couple had 7 children in addition to Janet's existing two from her first marriage.

Walter was a policeman. Given he was not a mounted trooper, his duties were very different to those of Thomas Skermer. He was mostly focused on all the normal duties which still make up much of police work now - detecting and apprehending criminals. While stationed in Kadina, he was given the job of arresting a particularly violent criminal, and he was fatally injured in the process. The SA Police History group described it as follows: "He had approached William Dibballs, a 39-year-old labourer whose behaviour in Graves St had become somewhat raucous on a Saturday evening in February, 1919. The patient police officer reasoned with Dibballs, whom he asked to behave and head for home. But the troublemaker, rather than co-operate, struck Wissell with a forceful punch to the face. Each man then struggled to overpower the other, until Wissell was able to bring Dibballs under control and arrest him... Wissell became gravely ill with pneumonia soon after the attack.  Although he received frequent medical treatment, the husband and father of four died in Kadina." 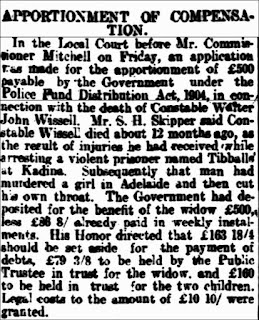 During his time in the police force, Walter had been an active member of the South Australian Police Association, a group which had been formed in 1911 and which today still carries out the mission of representing the members of SAPOL on all industrial matters. The Association believes that Walter was transferred to Kadina as a direct result of his involvement in a pay dispute and that as such his death was a direct result of his involvement in the union. As part of their centenary commemorations, the Association organised to have Walter's grave at West Terrace Cemetery refurbished, and a service was held by his grave to acknowledge his contributions to keeping South Australians safe, as well as helping his fellow police officers. 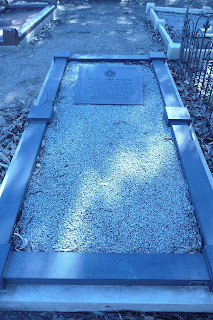 The refurbished grave of Walter Wissell at West Terrace Cemetery

Walter's grave lies in one of the many less-maintained sections of the cemetery, and so his grave stands out among the others. It's great to see an organisation value their pioneers and heritage in such a visible way. 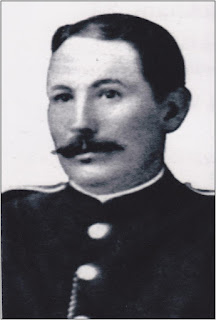