When I research many of my ancestors, I admire them and their achievements. There are quite a few for whom I feel a great deal of empathy as they faced tragedies which I can't even begin to imagine surviving. Most of them are still blanks, and I wonder about them. However, I do have a (mercifully short) list of ancestors who I really would like to punch in the head, because no matter how you package it they are bastard covered bastards with bastard filling. And I don't mean in the sense that their parents were not married when they were born. One of these people was Thomas Skermer. It was actually very hard for me to locate the evidence that Thomas was part of the family*, and sometimes I wonder whether he was worth all the effort!

Thomas was born in about 1826, in Bagworth, Liecestershire. He was the youngest son in a family who would go on to have two more daughters, Harriet and Jane (my great-great grandmother). In 1846 he was working as a book-keeper in Everton, Lancashire, and living at 5 Roscommon Street. It was at this time that he married Margaret Bowes, believed to be the daughter of Valentine Bowes, an Irishman. He gave his age as 24. By the 1851 census they had two children, and lived with Margaret's mother. Thomas had taken on work as a policeman, and his sister Jane had moved to the area where she was working as a housekeeper. 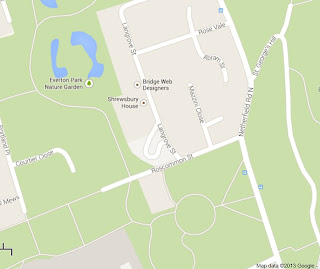 From 1857 to 1861 Thomas served in Coventry, Warwickshire as "Chief Constable and Superintendent", only the second person to hold that position. However, he absconded when there was an investigation into the force's accounts in November 1861, causing his predecessor Mr. Prosser to resume control. Perhaps his previous employment as a book-keeper had inspired him to do some creative accounting. We'll never know for sure.

Thomas is sadly not the only embezzler in my family**, however, his poor form didn't stop there. In 1861 he had returned to Liverpool, where he is recorded as a guest of his sister Mrs. Ann Parsons and her husband Charles. His youngest sister, Jane, had moved to Australia before 1853 and married a sea captain, Richard Evans, and in 1858 they had travelled to the UK and brought Harriet back to Australia with them. Thomas may have seen this as a chance to start afresh, and so some time in 1862 Thomas left his wife and three sons, who were in Warwickshire, and emigrated to Australia.

At the time the family were quite comfortable, even having a servant, but this wasn't to last without Thomas about. By 1871 they were lodgers in another family's home, Margaret was working as a needlewoman and the youngest two boys were working, one as an errand boy. By 1891, Thomas' boys were living in London in Aldgate, the suburb adjoining Whitechapel. 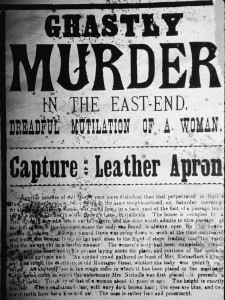 It was a very classy neighbourhood at the time known for its friendly and safe streets. Of course there was that thing with all the slums, poverty, gin-houses, prostitutes and Jack the Ripper, but apart from that...﻿

Meanwhile, on the other side of the world, Thomas joined the SA police force on 02 Dec 1862. He was recorded as being born in 1831 in England, and a former Inspector in the Liverpool Constabulary. Much of his service was in the mid-north of the state including time in Melrose and a posting in Lake Hope in 1867. This would have included experiencing the difficulties caused in the area by the drought of 1865 when a number of outposts had to be closed due to lack of fodder for the horses. 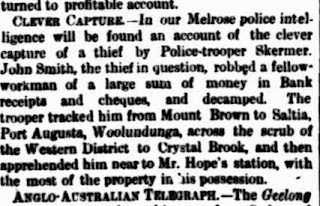 A typical case, reported in The Register, 02 Apr 1863
﻿
At the time, the area was still a rather wild frontier. There were conflicts with the traditional Aboriginal owners of the land the pastoralists wanted to take, and the troopers were often left in highly dangerous situations trying to keep tension to a minimum and "quell disturbances from the blacks". I don't even want to know what THAT'S a euphemism for.

Thomas was no doubt very relieved to be moved to the considerably more staid neighbourhood of Woodside, where he met Johanna Johns nee Ferk, the local publican's daughter. In somewhat unorthodox fashion the couple had a daughter, Martha, in 1865, and then married in 1868. It is possible that Johanna's first husband was still alive until then. Thomas' wife certainly was, but then she was alive for at least three years afterwards too... Thomas resigned his position as a Trooper on 28 Feb 1869 and went into the Ferk family business of inn-keeping.

By 1871 Thomas was an innkeeper at the Talunga Hotel in Mount Pleasant. It was during this time that Martha sadly passed away from Typhoid fever. I wonder if losing her reminded him of the three sons he had abandoned back in England, and how that made him feel. Bad, I hope. He was very highly regarded by the locals who gave him effusive praise in newspaper reports. Thomas later switched to a premises on Carrington Street (quite possibly the General Havelock). This was quite profitable and enabled him to buy the legendary German Arms Hotel at Hahndorf, although he never took on the license or ran it himself.

In 1877, Thomas also worked as a District Constable for the Mitcham area, and in 1878 he and Johanna separated. At the time he was involved in St. Mary's Church at Sturt where he volunteered as a Churchwarden. He continued to run the hotel on Carrington Street. In 1889 he placed death notices when his wife died, and organised her a grave very near the entrance to West Terrace, with an elaborate headstone. He joined her in that plot, under the very fancy stone, two years later when he passed away, leaving a sizeable estate including three houses, vehicles and horses. His beneficiaries were my great-great grandmother Jane, and her two sons, Richard and William (my great-grandfather). The boys continued to own the German Arms for several years afterwards. 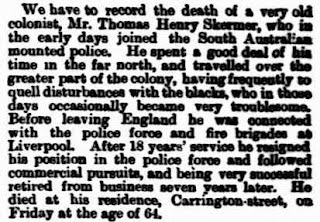 No mention of embezzlement, bigamy or being a deadbeat dad, then? How 'bout that!

William named the next son he had after his uncle, and I can understand why he memorialised him in this way: his uncle was probably always very good to him, they had lived with him in the hills for a while after his father had passed away, and he had been left enough money that both he and his brother were able to set themselves up in business. He was a child when Thomas began living with Johanna, and he probably never knew about what had happened in Warwickshire, or who had been left behind. However, Jane would have known it all, and yet she still was so attached to her brother that when she died, nine years later, she was buried in the plot next to him! It's good for family to stick together and all, but how could she be so accepting of someone who abandoned her young nephews! 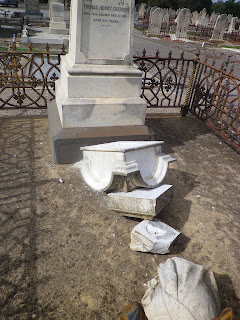 Since then, someone has vandalised his super fancy-schmancy headstone. I promise it wasn't me! That's what happens when you are that close to the entrance of an inner-city cemetery.﻿
A year or two ago when I did some DNA testing with ftdna I got contacted by a Skermer relative. Of course with such an uncommon surname it took us all of three seconds to work out that was the point of connection. When she asked where I was and I replied Australia, I got the oddest response. She emailed "Oh, you're part of that branch", or words to that effect. I could almost hear the dismissive sniff at the end. I never heard from her again. I suspect I have Thomas to thank for that.

*Of course, once Trove got going I found items which would have proved the whole thing in three seconds flat. Always the bloody way!! I'd been piecing together Bagworth Skermers, trying to work out if there was a connection between the ones who had emigrated to SA, and how Liverpool fitted in, and meanwhile there was an obituary stating it's where he lived and an advertisement out there saying that my great-uncle Richard was the executor for Thomas' estate.

** The other embezzler of note was Thomas' nephew, Richard, who took his uncle's lead in a big way! A post for another time!