Why is it always you, Jimmy?

So, recently I've been lucky enough to go to France and Belgium again for work. (The struggle is real, people. The struggle is real.) This time I was in charge of putting together the itinerary, and while I was the soul of restraint and did NOT stuff it full of things about my family, I did squeeze one significant one in. We visited the Passchendaele Archives/Musee de Passchendaele in Zonnebeke, which in itself is a great experience which I recommend to you. From there, we set off on foot to our next destination, Tyne Cot Cemetery, which has always been visited on our trip but usually by bus. The walk to Tyne Cot is not as pretty as many which surround the museum, but it's highly significant: the walkway used to be the railway line along which troops marched to notable skirmishes such as the Battle of Broodseinde. I know from his war record that James Arthur Pearson White spent the last day of his life marching along that exact path: the noise, the smells, the devastated landscape, the fear... 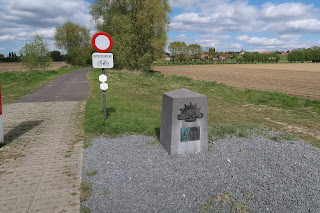 Sign at the start of the walkway to Tyne Cot

Along the walkway are plenty of remnants from the war, although there are also fields being ploughed, birds singing and other pilgrims walking back in the other direction. It's hard to imagine what it must have been like 99.5 years ago when Jim took this same route to his final resting place. 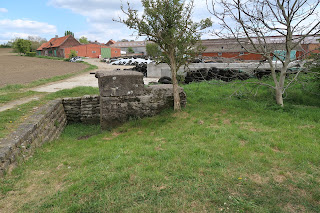 Some of the remnants of war alongside the path

As I have previously mentioned, the archivist had supplied me with a modern map showing the field (and it is literally a field) in which Jim was killed by a shell, either while nursing a wound or just suddenly. I don't know that I'll ever have the opportunity to visit that field again, but for ten minutes on a sunny but chilly afternoon in April, a descendant of Ben and Lydia White was able to stand at the spot in which their son lost his life, on behalf of all those who remembered and loved Our Jim but lived out their lives a world away in Australia. 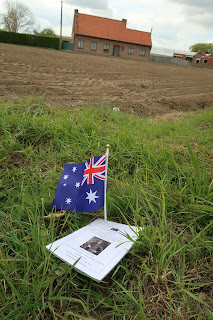 While Jim's remains have never been identified, it's very likely that after the war they were discovered and removed to the Tyne Cot cemetery, the Commonwealth War Cemetery in the world. However, with so many graves the experience is quite different to visiting one individual soldier from the family. This makes my second Tyne Cot visit, and I feel far more as though I have had the chance to pay my respects to Jim in the field than in the Cemetery where he probably lies, unknown but not unloved. 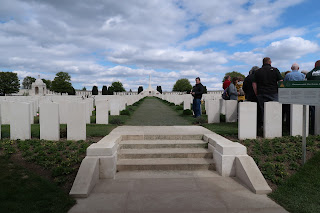 Of course the day concluded with a visit to the Menin Gate Memorial to the Missing and attendance at the Last Post Ceremony, and on this occasion someone was flying in a hot air balloon, high above the arch where we stood paying our respects to Jim and to all of those men missing in Flanders Fields. 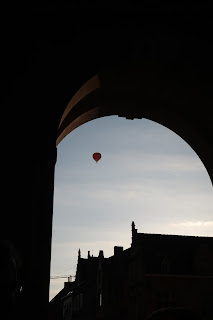 For Lydia. For Ben. For Florence. For Elsie. For Diana. For all of us.