One of the great delights of my family research in recent months has been discovering, via this blog, many White relations who share my interest in James Arthur Pearson White. Through the very kind sharing of many of these relations I've discovered a few things which have brought me much joy:

1) That James' daughter did know she was his daughter, and grew up hearing his stories. I'm so happy to think he wasn't forgotten by the most special person in his world.

2) That Elsie did go on and find happiness in her life after the tragedy which befell her during the war.

3) That items such as James' Dead Man's Penny survive and are cherished by relations to this very day.

Given it's other people's information I'm not sure how much I'm at liberty to share, but more letters, photos and records of his survive than I had thought possible.

Jim died, but he lives on in the memories of many, both here and in England. 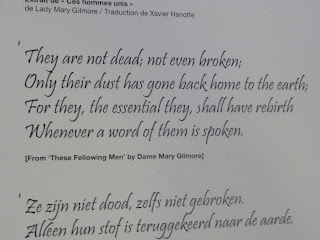 Sign at the Musée de la Battaile de Fromelles
Posted by GenXalogy at 02:57

Email ThisBlogThis!Share to TwitterShare to FacebookShare to Pinterest
Labels: Lest We Forget, Walklett, White