Some blog news. Thanks to the good people at the Australian & Local Family History Blog Group on FB, my blog is now being archived by the National Library of Australia as a future resource for researchers. Now that's some motivation to get blogging!

Hope they've got a fucking language warning on that one!

Nothing much has changed here. I am still waiting to hear from the person who has the McDermott treasures. I am still in possession of That Family Heirloom. I still can't work out who killed Nellie Cunningham.

Some time ago I posted about Ken Taylor, International DNA Man of Mystery (IDNAMoM). His parents were Unknown Male and Liar-Liar-Pants-on-Fire Female. He then married Sheila Smith aka Sheila Stanley, daughter of Unknown Male and Miss Nellie Smith. Yeah... there's a lot to go on there... 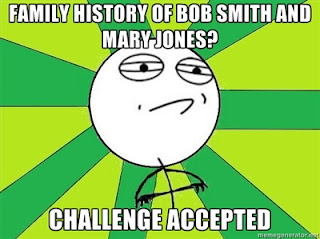 At the time I made mention of the unwillingness of their living children to shed any helpful light on the situation. I don't even know when my mother in law's brother was born! However, I have never given up hope of finding out more, and every so often go on convoluted fishing expeditions in an attempt to trick the living relatives into disclosing even a little something I could go on. I've bribed them with chocolate. I've plied them with alcohol. I've tried catching them by surprise. I even bought one of them a "Love Actually" DVD. It's got me nowhere.

Help from an Unlikely Source

Fast forward to a few days ago. My husband's cousin, who through age gap and geography is not a person we really keep in touch with, prompted her mother to take pictures of some old photos on her phone. Thinking she might as well, said mother forwarded them all to my mother-in-law, who mentioned it since she's generally prone to telling you every single thing she did last week (right down to how many tomatoes she got at the supermarket) and I don't think knows how to stop herself. 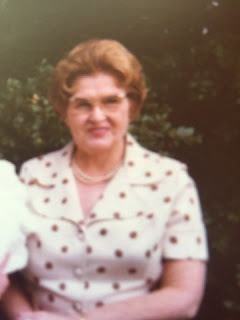 Well, she could hardly stop me! In the end I had to wrest the phone from her very reluctant but aging and arthritic hands. Muahahaha - er, I mean, I managed to see the photos after applying a little gentle persuasion. Nothing unethical HERE. As I was looking through the photos, she said one was of 'Uncle Phil.' 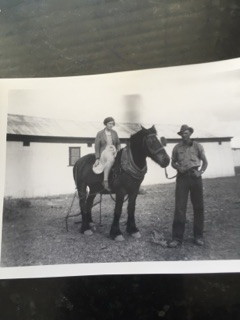 "Ohhhh," she said. "He was Sheila's brother. She had lots of siblings. There was Morris and Phil, Rosie, Eileen, or was it Elaine? Some others as well."

I could hardly write it down fast enough and skipped out the door to hop on both Ancestry and Find My Past to see what I could find. Smith? Nothing to go on. Morris, Phil, Rosie Smith... Now we're talking. I eventually found a Catholic family from Hookina who had quite a number of children including Ellen, Maurice, Phillip and Rose. AND a person on Ancestry who was researching them! It seemed they were more likely to be Sheila's aunts and uncles than siblings, but it had to be them.

At 11:30 last night I received a message from an equally excited Smith researcher confirming that YES, our Smiths are his Smiths. Suddenly I've gone from no Smiths to three generations back, and have crossed the pond. Boo-yah! 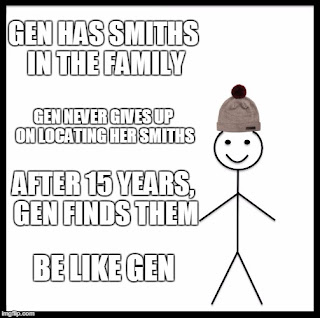