What Would Your Ancestors Do? #1

How to Vote
With only just over 12 hours before polling booths open for the 2014 federal election, Twitter, FB and all our other social media channels are chock full of politics. Yeah, I know some people are complaining about that, but personally I think it's a good thing. There are too many countries where people are dying for the right to vote, quite literally, for me to be anything but grateful both for voting and the right to bitch and moan about the government/opposition/unicorns without having to be concerned about who will come knocking on the door.
Anyway, it's no national secret that voting often runs in families, and people often vote for the people their parents did (to begin with, at least). I'm a little curious though about the degree to which that extends to other relatives, so I did a quick canvas of the political leanings of people who appear in my family tree whose views can be established with any certainty: 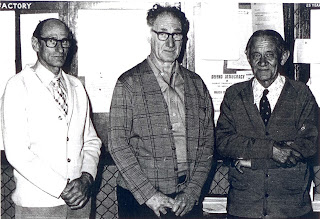 Grandpa on his last day of work at Holden's Woodville plant

My grandfather was ALP through and through. He always told Grandma the whole family should vote Labor, because we were working people and Labor look after the working folk. It's so imprinted on my grandmother's brain that even now she's nearly 100 and can't remember who her own great-grandchildren are, she still repeats that mantra whenever voting time rolls around. Grandpa worked in a factory as a foreman, and although he was offered many promotions to higher management positions, he always turned them down, saying he wanted to stick with the workers. Grandpa was a firebrand, and an agitator.

We don't know much about Patrick. He died quite young, and for reasons I'm sure I'll blog about in future, nobody spoke about him much. One thing we do know is that he was from Derry Goolin, Galway, and that he emigrated here after the Land War had been underway for a few years. His neighbourhood was actually one of the key districts in the Land War because it was land owned by the absentee Marquis of Clanricarde, and the primary agitators in the area were young, single, Catholic, male labourers... like Patrick. One of his relations, also Patrick McDermott of Derry Goolin, later became a Nationalist MP. I know that there are conservative nationalists, but as a general rule of thumb, the Irish nationalists who emigrated to Australia have tended to be left of centre.

George served two decades on the Morgan Council and was plainly a man who cared about civic affairs. However, I have never been able to establish exactly what his political leanings were. Perhaps they were the same as his son's?

Ellis was George's eldest son. He spent most of his adult life in the Port Pirie district. He was at one point the Councillor for Solomontown (like father, like son), and was also involved in two other organisations which still survive today: 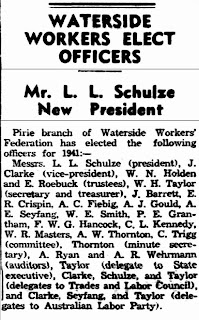 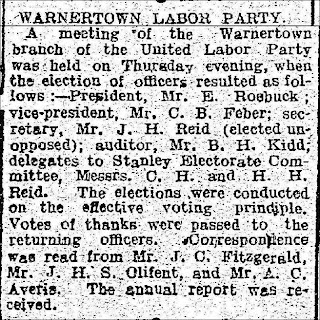 ﻿
That's it for dad's side of the family. On mum's side, I could only find out about two: my first cousin twice removed, Seymour Gough, who was a member of the Australian Communist Party, and my great-great uncle, Richard Owen Evans, embezzler of note, who was Councillor for Rosewater for several years. He owned a business, but nothing he said, did or wrote that I have clearly indicates his views one way or the other.

In fact, the only person I could find in the tree who I knew batted for the other team, so to speak, was on my husband's side, not mine. That was his grandfather, a bank manager, who stopped voting the the ALP after Chifley nationalised the banks.

So, it shouldn't come as any surprise to anyone that this handsome fellow adorns the dining room wall at our house: 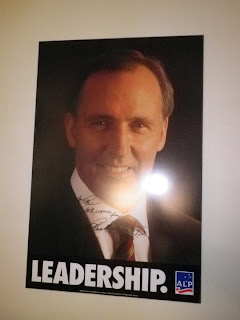 Yeah, I'm getting my blog on on Friday, not Saturday. Saturday I'll be crying into a whiskey. I've never been a great one for drinking whiskey, but I think it'll be a good day to start.﻿
﻿
Posted by GenXalogy at 03:12

Email ThisBlogThis!Share to TwitterShare to FacebookShare to Pinterest
Labels: Derrygoolin, Gough, McDermott, Morgan, Politics, Port Pirie, Roebuck, Unions, What Would Your Ancestors Do?