It's been very busy lately, so I'm going to be using my genealogy time to utilise my new spiffy Findmypast subscription rather than blogging this weekend - I need to relax! However, I had to chip in on the Geneabloggers Open Thread Thursday topic for the week: Ethical Dilemmas. I'm not going to blog about specific ethical dilemmas, as that's something I do regularly in  my blog (eg Mervyn Dawson, THAT family heirloom etc.) However, I'm going to list my key considerations when it comes to disclosing information.

1. I firstly always consider those who are living. If it's going to be deeply distressing or humiliating for a living relative, negative about them or adversely affect them, then there's no question I'd keep it on the down-low.

2. I also consider whether social attitudes have changed on the issue at hand. For example, illegitimacy has no social stigma now, so it doesn't trouble me to find out about that or share it. Nobody who hears it is going to think any the worse of my ancestor/relative now. In fact, often it's quite the opposite: people have more admiration for them for having faced adversity, or they enjoy having a connection to a good scandal or a total scoundrel.

3. If I think it will be a bit upsetting to someone, I may still share if I think there's a greater interest or another angle on things. For example, there are some cousins who might find the lack of genuine Scottish DNA on the part of Samuel McPherson a cause for concern. However, I maintain ongoing interest in all things Scottish is perfectly appropriate to those descended from someone raised by a Scotsman. It was part of how Samuel was brought up and what he was taught. The fact his actual genes came from elsewhere doesn't alter or lessen the impact that has had on our family and their identity. We know he saw John McPherson as his father. Not only that, I think the story of his true biological heritage brings another degree of richness to our family, and has always been part of our family story too (you can't turf his 'real' dad without turfing his 'real' grandma, who it turned out was also part of the heritage we'd been handed on.)

Apart from that, I've got to say I'm from the Publish and be damned club. Nobody wants to read a genealogy which makes the entire family sound like a bunch of sanctimonious fuckers. In addition, I'm not a big fan of cherry-picking in any form of life: you deal with the facts as they are and in their entirety. Then of course there's the fact that I'm generally lacking in gentle/subtle approaches or the ability to give a shit what anyone else thinks: those who know me personally know that for me, every day is Tell It Like It Is Tuesday! (I am, conversely, very hard to offend or upset.)

In answer to the title question, is there a 'right' to do genealogy? I say 'damn straight'! 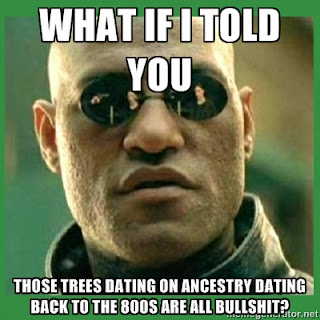 And just to further get into the Tell It Like It Is Tuesday spirit...
As a totally off-topic addition, today I received a rather exhilarating geneaboost. I have many of my media files on Ancestry, including the marriage certificate of my semi-brick wall great-grandfather, Patrick McDermott, for whom I have never located a living relative aside from my immediate family. Consequently I went temporarily insane with excitement today to discover the following comment added to the file, which has been there unremarked upon for three and a half years: "Found this Certificate of Marriage in with family documents."
Can it be? Has someone found a copy of this certificate in a box they are clearing out, and checked on Ancestry to see what they can find out about the people it belonged to? Could this person turn out to be related to Patrick's brother who was alleged to have moved to Australia? Could his/her ancestors have known my ancestors? Will I find out more about Patrick? I shelled out $10 for a pay-per-record Ancestry subscription* just so I could message the comment's author, so I hope I hear back SOON!
*I have previously had a World Heritage subscription, but have rather exhausted the current records so decided to switch to Findmypast for the financial year and check out their stuff instead.﻿
﻿
Posted by GenXalogy at 03:59