Enlisted on the Other Front

So, sensational news during the week. Yours truly is being sent by work to the French battlefields for the Villers-Bretonneux dawn service, ANZAC Day '15. Naturally this is terribly exciting for all sorts of reasons, but part of the excitement is definitely because of the genealogy potential. Before I go I will be checking the locations of service for all my relatives who served in WW1, especially those who never returned.

It will be almost 100 years since, in September 1915, my great-grandfather Francis enlisted for the war. He left his wife, toddler and four month old baby and travelled to France, no doubt spending time in Paris as I will, before heading to the Front where he was a Driver in the Field Artillery. Francis was shot in the jaw in August 1917. It was a near thing for him, but Francis and his brothers (all three of whom served) were lucky: they all came home at the war's conclusion. His son would not be so lucky when the next war rolled around.

Like most, I have my share of family World War 1 stories that didn't end very well at all, like William Matthew Colbert who entered the war underage using an assumed name, confessing on his death bed to his real details so his mother would be told what had happened. He was 17. However, the person I'm going to write about today had quite a different situation:

In 1915, Victorian Blacksmith James Arthur Pearson White enlisted to serve in the Australian Imperial Force. The Darby book tells us that Jim enlisted in the 27th Battalian of the AIF. He was been sent home to recuperate from a knee injury, but he re-embarked and joined the 43rd Battalian. He was killed only eleven days after arriving back at the front, on 10 Oct 1917. Family legend has it that Walter (Jim's brother who was also at the Front)  had spoken to Jim late in 1917 and they had arranged to meet the day he was killed. It also says he married while away and that his wife and daughter came out to Australia after the war. 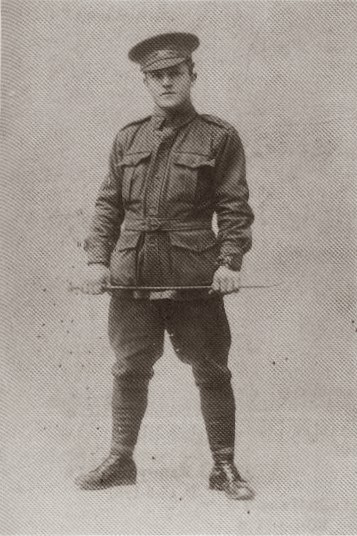 Most of you will have realised I'm not one to take things at face value, so of course I revisited everything to see what I could find out about James myself.  In his war record, there is a conflict alluded to between my great-great-grandmother, Lydia White nee Pearson, and James' English wife, Elsie, over whether Lydia or Elsie's daughter Diana (also referred to as Dinnia) were entitled to James' war medals etc. There is a date of marriage given (Registrar's Office, Cardiff Street Oxford, on 12 May 1917), and an address for Diana, 5 Bath Place, Holywell, which is turns out is a tiny lane off a road which passes through Oxford University, now the site of a hotel.

After extensive digging, I have been unable to locate any marriage between the two. Elsewhere in Jim's war record Elsie is referred to as his "unmarried wife", so I have formed the view they were never actually legally married but only said they were to meet some army administrative requirement. I did, however, find an Elsie at 5 Bath Place, Holywell, in the 1911 census: Elsie Walklett, daughter of John and Mary. While there are two other Elsie Walkletts who married in the 1920s, the only marriage I could find in Oxford, or during WW1, for an Elsie Walklett was to Albert E Drewett in 1915. I also found a birth entry for Diana Drewett in Oxford in the first quarter 1917. Naturally the correlation of names meant that I wanted to find out more about the Drewetts to see if there was a connection.

The BBC's Remembrance Page says that Albert E Drewett enlisted in the 1/4 Bn, Oxfordshire and Buckinghamshire Light Infantry, previously residing in Oxford, Oxfordshire. The author of this post also wrote on Genforum that Albert married Elsie Walklett. He died on active service on 21 May 1917 and was laid to rest at Hermes British Cemetery in Pas de Calais. He was 24. The entry is from a niece of Elsie's. I suspect were we to compare notes, we would find that Elsie and Albert married when she was expecting Ivy, her first child. Albert then enlisted, and Elsie met a young Australian soldier who became her lover. When she fell pregnant, she and the soldier deemed it expedient to claim they had married.

The whole story is tragic. Jim's mother (my 2x great grandmother) had separated from her husband and was reliant on her sons for income. In addition to her grief, his death had serious financial implications for her. She was very shocked about his relationship and the probability he had fathered a child. Meanwhile, Elsie suffered the loss of her husband and her lover, and was left to raise a baby and toddler alone. The daughters were left without their father, and who knows what the Drewetts thought about the whole situation! 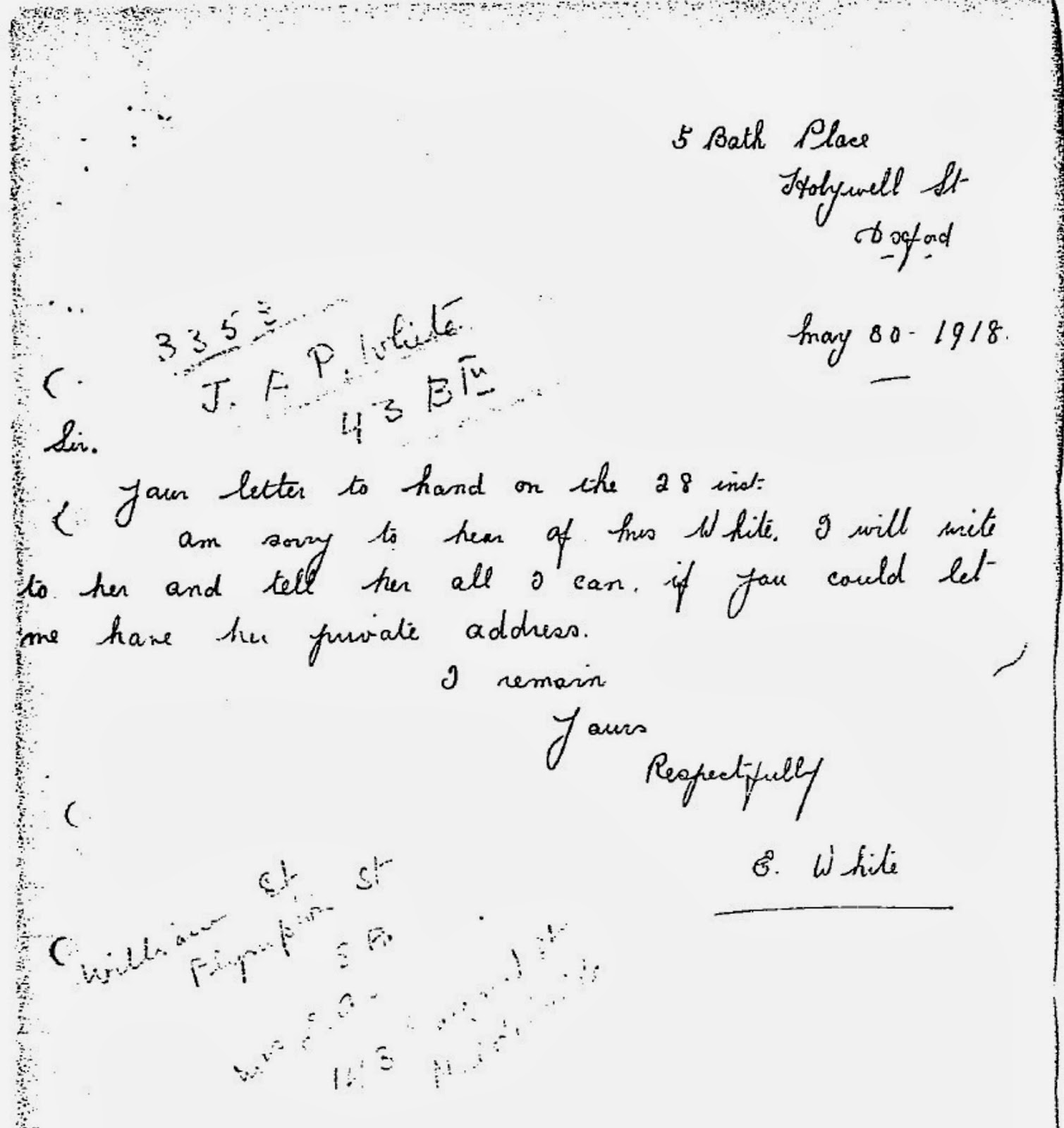 Letter from Elsie Walklett to the Red Cross

I have not been able to discover exactly what happened to Elsie and Diana after the war. There is a Diana Drewett who married a Mr. Nutt in the 30s in Oxford, who may be our Diana, but with three different surnames and two different countries to look in it has proved quite difficult. I wonder what Elsie and Diana's relations know about Diana's paternity, given the documents relating to it are probably only in Australian records which they may never have thought to look at (and why would you?)

Most blog entries about War service very rightly focus on the lives and deaths of those men who enlisted for active duty, but whenever I become aware of a story like this I am reminded of the truth of Milton's words, that truly "They also serve who only stand and wait".


Timeline of Events:
Jan 1915 Albert and Elsie marry
Jun 1915 (quarter) Their daughter Ivy is born
August 1915 Jim enlists for the war
Mar 1916 Jim is in France
Mar 1916 Jim injures his knee, three days after arriving at the Front
May 1916 He is sent to the UK to recuperate
Diana is conceived
Jun 1916 Jim is sent back to Australia for three months
Jan – Mar 1917 Diana is born
Feb 1917 Jim arrives back in the UK
May 1917 Jim allegedly marries Elsie
Albert dies
Sep 1917 Jim is sent back to France
Oct 1917 Jim is killed, only a couple of weeks after arriving back at the Front