I've just been told that work are sending me to the delightful Clare Valley for a week at the start of June. I've been hassling the person in charge of the trip for a full itinerary. She probably thinks I want to hit the wineries. What a waste of time that would be - if I wanted a bottle of wine I could get one from the bottle-o when I get back home.
My husband's relations, the Colberts and the Fudges, had quite a few members move to Clare and Sevenhill, so naturally both cemeteries are high on my to-do list if we end up having any free time. I have pictures of most of the existing headstones connected with the family but would love to pay my respects in person. While the Catholic Church in Clare was the place most of them worshipped, quite a number attended the wonderful historic Sevenhill Church. I have fond memories of hanging out in the crypt as a kid, reading about the Polish priests who started the parish while my parents were in the winery... this could explain why, quite a few years later, when I think "Clare Valley" I think dead people!
﻿

I don't care what anyone else says - this is the place to be!
The thing I'd like to do most of all is actually to do with my side of the family. In 1865, my ancestor Jestina Darby's nephew Walter Lavis married Ellen Maynard at St. Barnabas' Church of England in Clare. (Ellen's parents John Maynard and Elizabeth Seymour were pioneers in the district.) In 1873 Walter was called up to be a witness in a court case in Adelaide. The case dragged on, and Walter started spending time at one of the local watering holes. It was there that he met Mary Ann Martin, and the pair were married on 08 March at the home of Mrs. Catherine Gay on Gilles Street.
They travelled to Melbourne for a honeymoon, and it was there that Mary Ann became aware of a slight serious problem... Walter was still very much married to Ellen! Walter was arrested on 20 May and in August pleaded guilty to bigamy. Five years later, Walter was dead, having been run over by a bullock dray in Appila, NOT (as far as we know) driven by either of his wives. Ellen, who was two months pregnant when she was widowed, remarried an Appila (Yarrowie) local, David Clifford, and we hope lived happily ever after. However, some questions remain:
1) What happened to Ellen after her marriage to David?
2) What happened to Mary Ann after the court case?
3) How did these events contribute to Walter's children Henry, Albert and Louisa moving to New South Wales, where they became the adopted children of Solomon Wiseman? 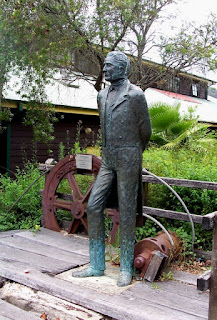 Yeah, grandson of THAT Solomon Wiseman.
I'm really hoping that while I'm in Clare I'll get a chance to visit the Clare Regional History Group, the Clare museum (that's Ellen's parents on the back wall of Room 1) and anyone else who may be able to shed light on that one! 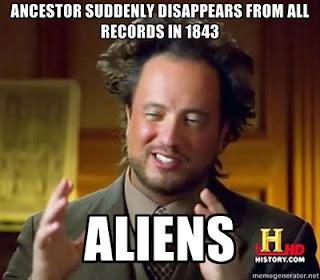 The only possible explanation!
﻿
Then of course there's the trip back. I'll be so close to Riverton that it should only add an extra half an hour to the trip to stop in and visit the Riverton cemeteries where so many of my Darby ancestors lived and are buried. I'll also pass through Tarlee, where my grandmother used to live and my great-great grandfather taught school.
Wines... who's got time for 'em?﻿
﻿
Posted by GenXalogy at 04:30