Aboriginal readers are warned that this blog post contains images of deceased persons.

I've really been enjoying the most recent season of Who Do You Think You Are? There's been an interesting selection of feature celebrities, and finally, at long last, there's been some content of direct relevance to my own research. The episode on Paul McDermott has been great for clarifying which SA McDermotts are from which branch. As is typical with Irish families, they all have the same names, so that's been incredibly helpful despite the lack of Irish content (I'd always hoped Paul would be selected, although didn't think it would ever happen, and I'd be able to get help with the Irish brick-wall! Sadly beyond mentioning where the family are from they didn't go there at all.)

You can see why I never expected this to happen. Who picks this guy to be the subject of a TV show aimed at baby boomers?

The episode it turned out was the most interesting was one I didn't expect: the episode featuring Adam Goodes. It's made me ponder a number of issues about my family's role in our nation's history. I've alluded before to one of my Dirty Rotten Scoundrels, Thomas Skermer. Thomas was at one stage a Trooper who was employed to "quell disturbances with the blacks" in the state's mid-north. However, it's not the only time a family member had recorded* interactions with the First Australians.

In 1896, my 3x great aunt Euphemia Dorey married William Finlayson in the Bible Christian Manse at Kadina. The couple spent the early years of their marriage at Point Pearce Mission Station, where William worked as the Chaplain. Located on Narungga land, the Mission Station had become a place where Aboriginals from different People throughout central SA were herded together and put in an environment designed to strip them of their language, heritage, culture, and assimilate them into the European community. There were positives and negatives to William's involvement. He was a deeply religious man, and I've no doubt was motivated by good intentions. However, he was part of a paternalistic system which we know had devastating long-term effects on the Aboriginal people. 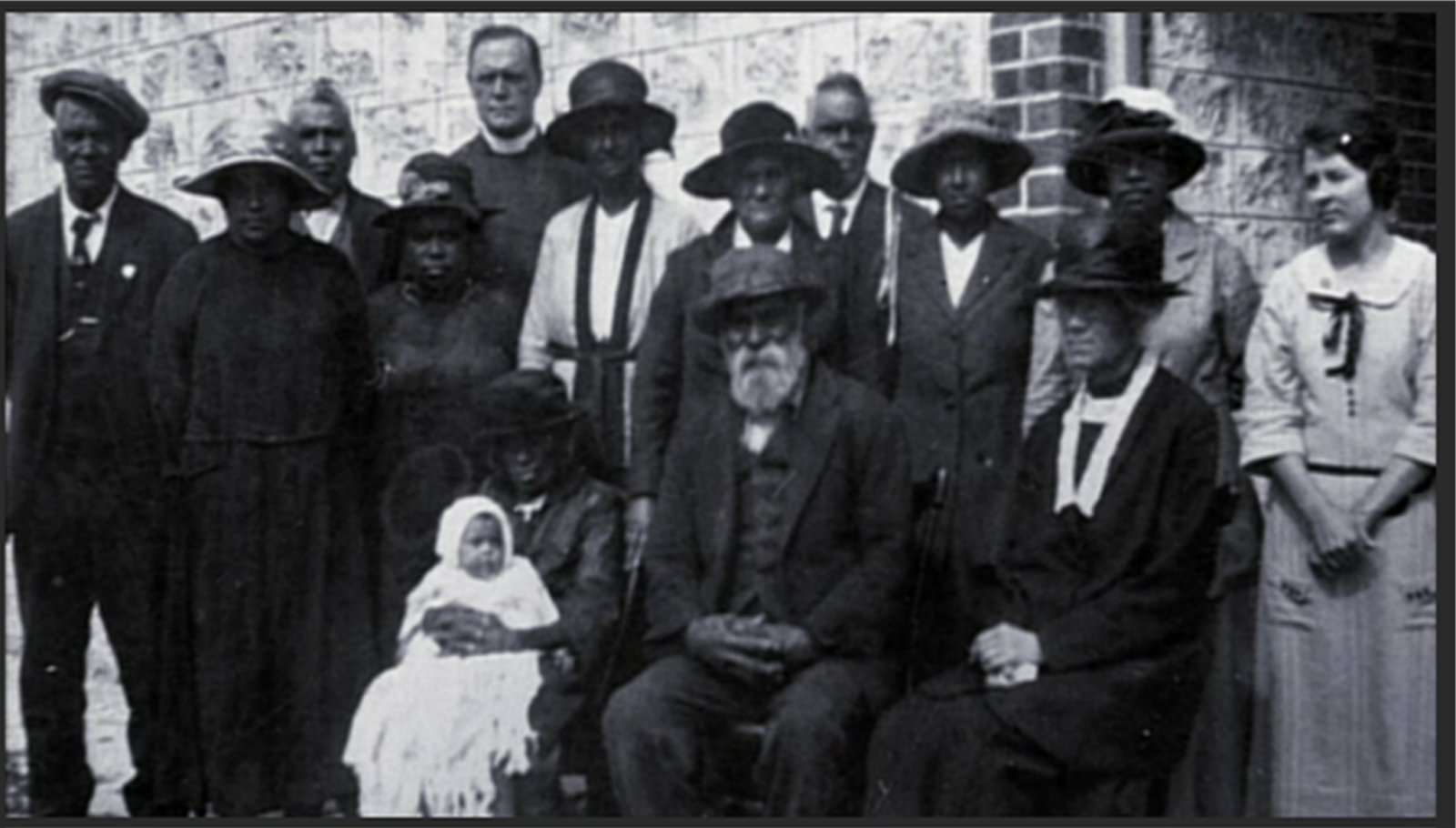 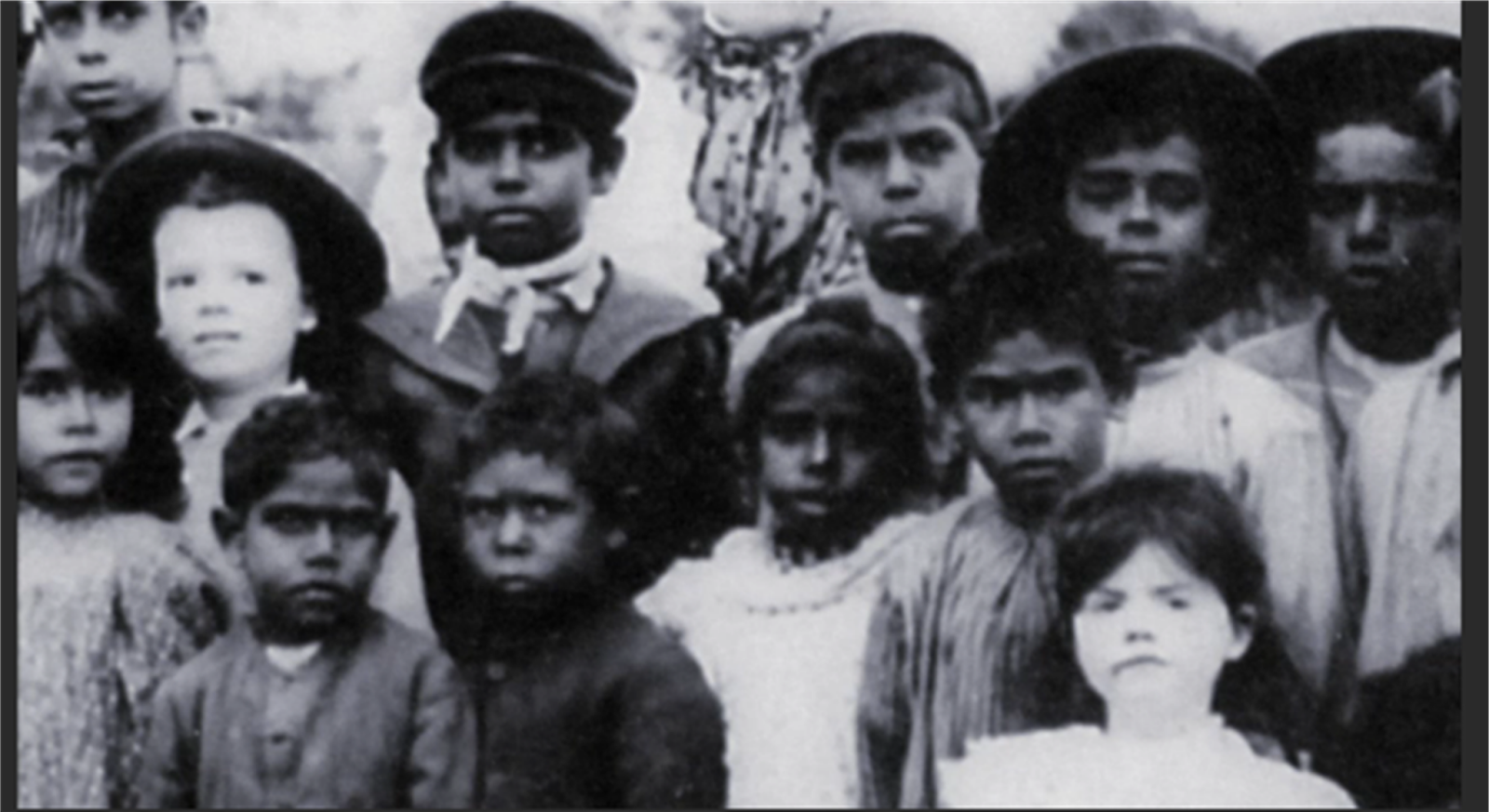 These two pictures were shown during the program, and I'd love to know more about them. The white girl on the right bears a distinct resemblance to another picture I have of a niece of Euphemia's.

In 1906 William made an abrupt career change. One of the areas of my research is focusing on trying to discover what motivated this. He became a wheat buyer for Wells & Co., working with his brother-in-law Walter. Based on the Yorke Peninsula, his work took him on regular trips across to the Eyre Peninsula. It was there that he died in 1910 and he is buried in the Cowell Cemetery. The cause of death was alcohol poisoning, and it was reported at the inquest that he was alcoholic, something which poses further questions. Was this the cause of a dismissal as chaplain, was it a response to losing his job, or something else? Euphemia was left to look after her seven children, aged between 14 and 1. Unusually, not only was Euphemia able to provide for the family, the children were quite well educated. Douglas became a Pharmacist for example, as was Clem, and Robina became a teacher. 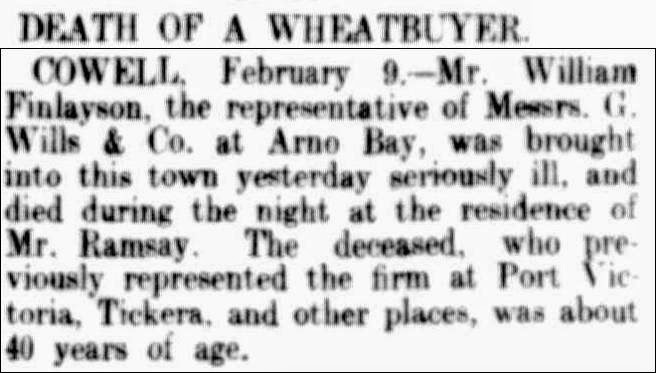 Report of William's Death in The Register, focusing on his very recent work history

In 1929 the youngest daughter, Mary, married Martin Chemnitz Kriewaldt, a lawyer who had been educated in the US and in Adelaide. His father was a Lutheran minister, a man who had an interest in Aboriginal missions which may have lead to the two meeting. The couple lived in the leafy eastern suburbs, and frequently appeared in the society pages. Their lifestyles couldn't have been further apart from that of the Wanganeens, Sansburies, O'Loughlins and other families among whom Mary was born. However, this didn't bring them lasting happiness. Their marriage ended in 1947, and Kriewaldt moved to the Northern Territory. "Big Feller Judge" is described as having unusually enlightened perspectives on Aboriginal issues in records of his career such as that at the University of Queensland, and is regarded as having set a new benchmark for fairness in legal decisions affecting Aboriginal people at the time. Despite this he ended up becoming most remembered for being the judge who sentenced Albert Namatjira. Records suggest this case devastated Kriewaldt, and he died shortly afterwards, as did Namatjira (whose artwork had always adorned Kriewaldt's office). Kriewaldt was also a supporter of assimilation policies. 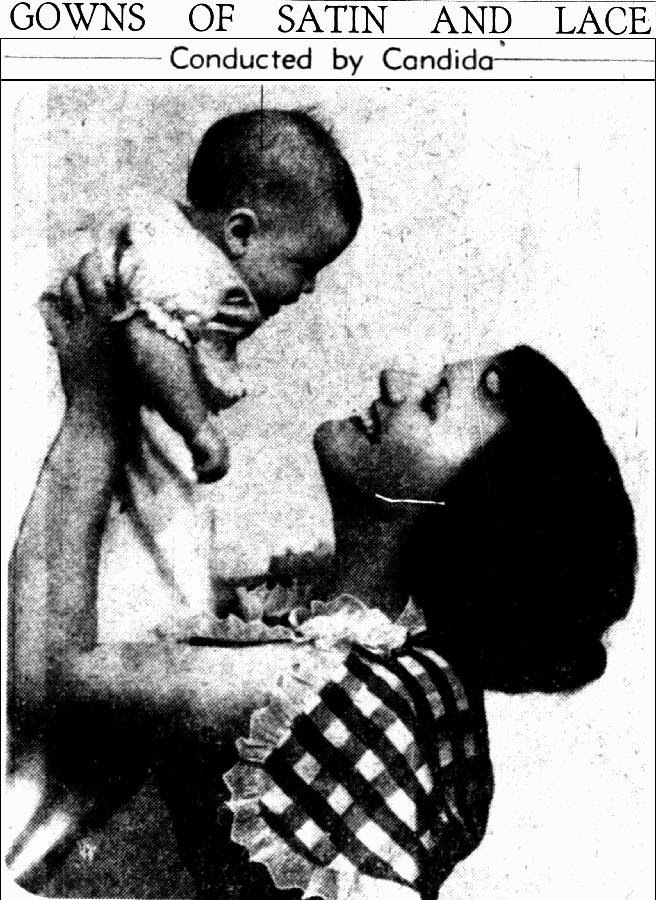 Mary and her daughter Rosemary in the newspaper in 1939

The story of this part of my family is extremely sad. While Thomas Skermer may have participated in literal genocide, this branch of my family were engaged in cultural genocide. They were people who wanted good outcomes, and I think it would have broken their hearts if they had realised the terrible consequences of the systems in which they participated, outcomes so clearly illustrated in the story about Adam Goodes and his family.

Nearly two years ago, while on holiday on the Yorke Peninsula, I thought that I should travel to Point Pearce and take a good look at some of the consequences of actions carried out not only by European settlers and the systems we introduced as a whole, but by my family quite directly. This is what I saw: 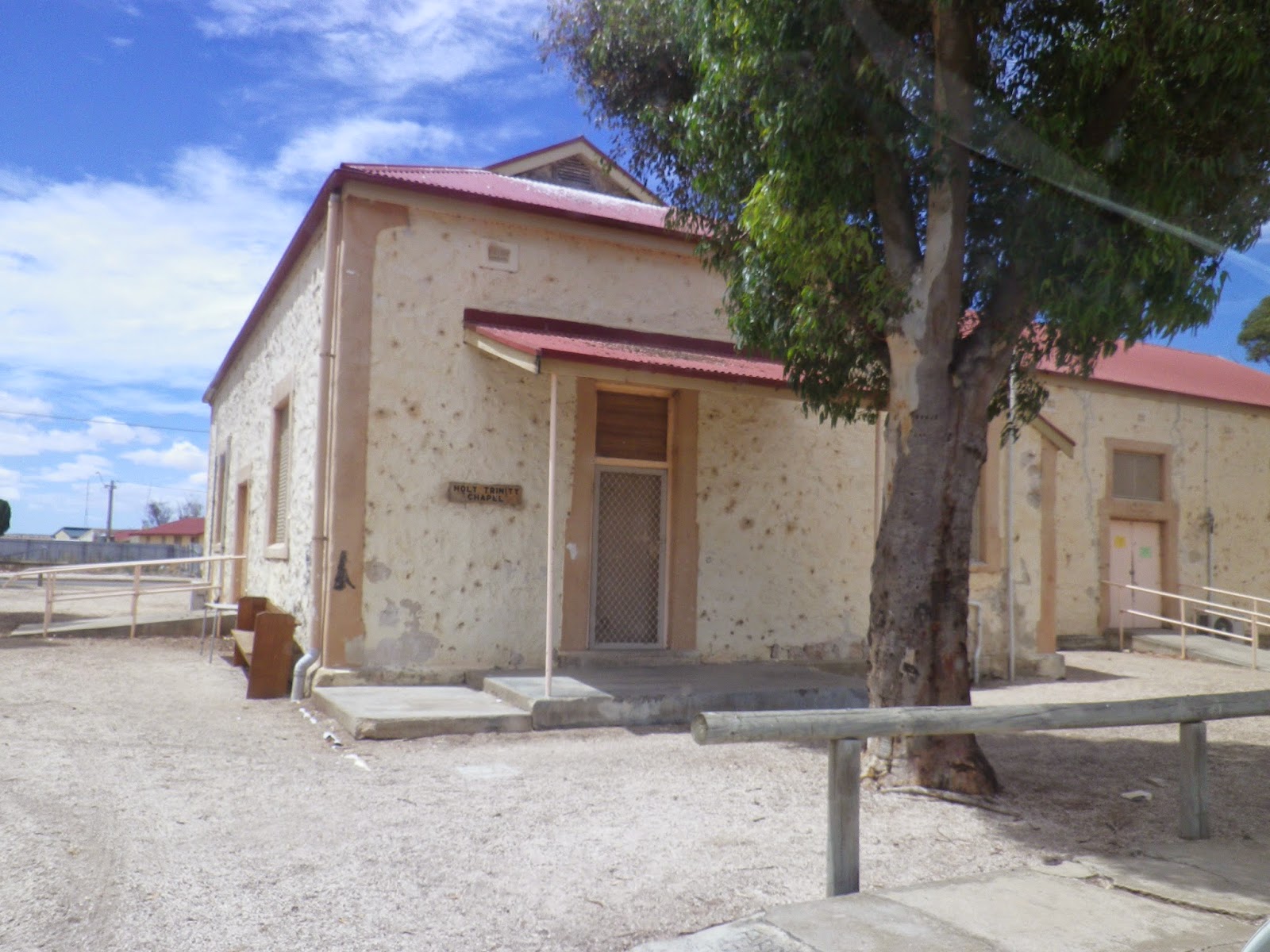 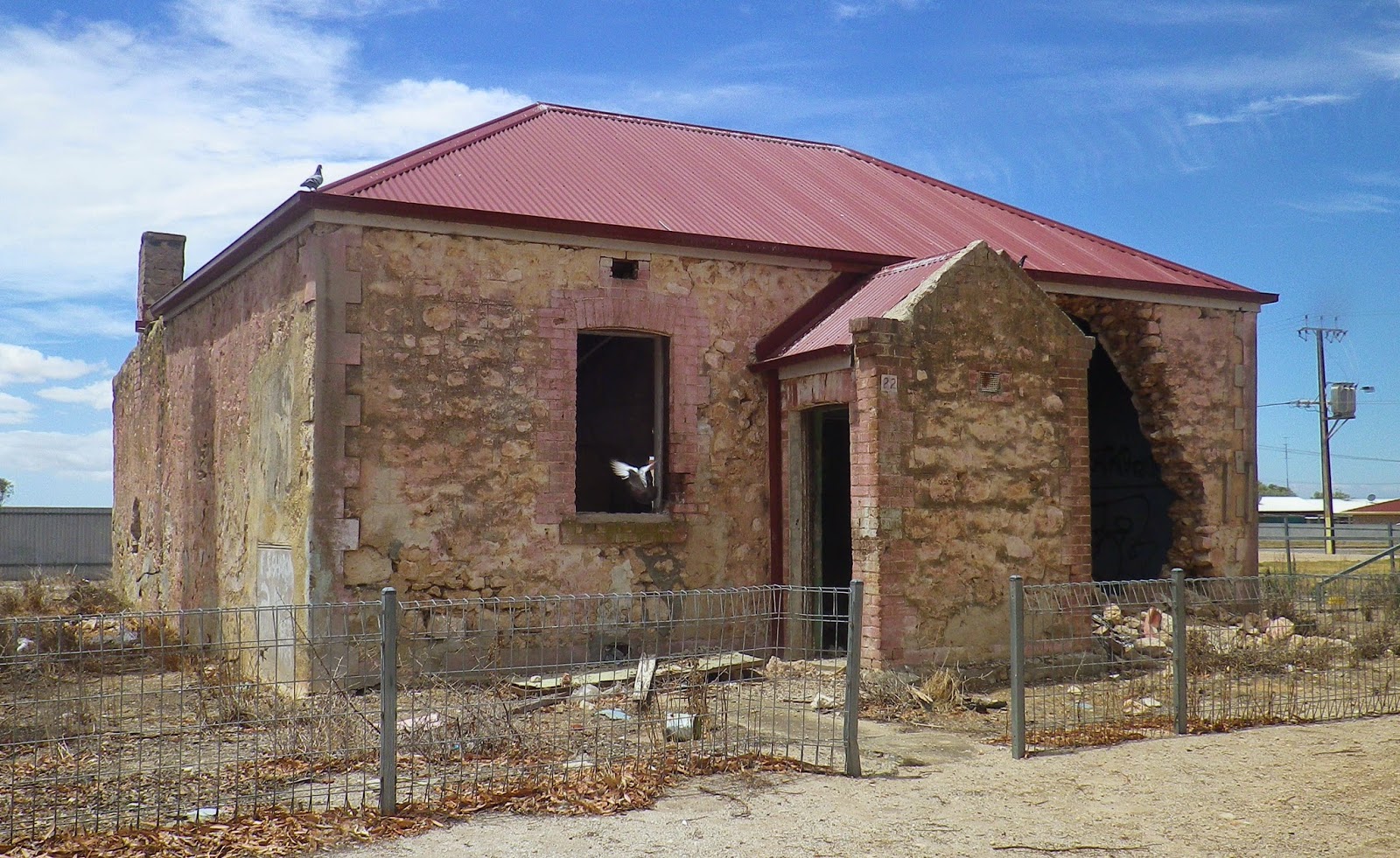 One of the Original Buildings

Point Pearce is not a pleasant place to be. There are bars over all the windows. There is nothing growing, and a lot of evidence of vandalism. Aside from the school, which is beautifully maintained but set behind 7 foot fences, most of the buildings are quite spartan. There are no shops or offices providing employment or quality of life. I spoke to one of the residents, who said that it can be truly terrifying at night. My children and I watched children play in facilities I'd associate more with a developing country than a Yorke Peninsula coastal town, and my heart ached for them. 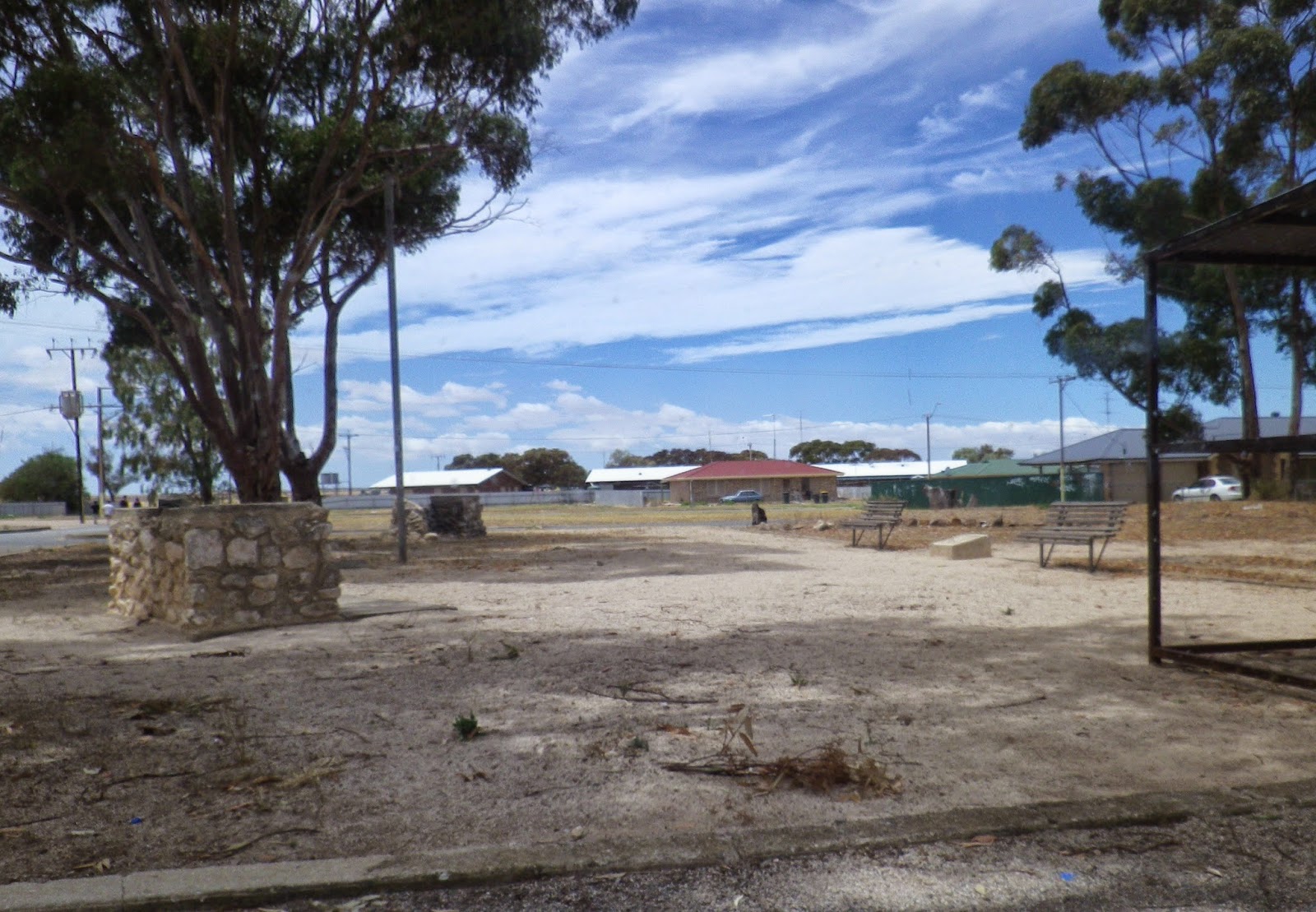 Although they never, ever intended this, the current situation in Point Pearce is the outcome of those policies of protectionism and assimilation pursued by members of my family. Their actions disconnected Aboriginal people from their lands and culture, leading to loss of identity and inner-brokeness which are still making their presence very much felt in Point Pearce in 2014. I am certain my family were good people. I'm certain they did what they did because they wanted the best. However, we know that's not the effect it had, and for that, I am sure they would want to apologise.

In his Refern Speech, Paul Keating very famously said that  "the starting point might be to recognise that the problem starts with us non-Aboriginal Australians. It begins, I think, with the act of recognition. Recognition that it was we who did the dispossessing. We took the traditional lands and smashed the traditional way of life. We brought the disasters. The alcohol. We committed the murders. We took the children from their mothers. We practised discrimination and exclusion. It was our ignorance and our prejudice. And our failure to imagine these things being done to us. With some noble exceptions, we failed to make the most basic human response and enter into their hearts and minds. We failed to ask – how would I feel if this were done to me? As a consequence, we failed to see that what we were doing degraded all of us." When I hear that speech, I know that 'we' refers not just to a culture of which I am a part, but of my very own family, and I am sorry for the actions of both. 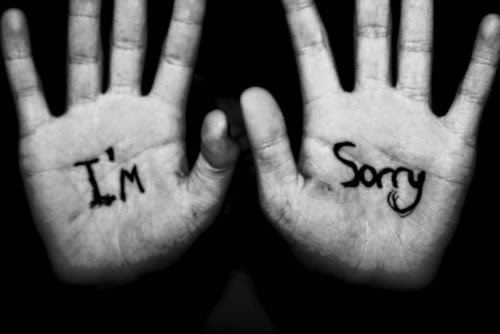 I think those of us in the genealogy community could be perceived as focusing on only one side of the pioneering stories, celebrating their triumphs and being responsible for perpetuating an image of the 'good old days' which white-washes over Aboriginal experience of these events. However, I don't think it needs to be that way. Just as researchers have made huge progress in how they report illegitimacy, criminality, homosexuality or other formerly taboo topics in their family histories, I think we can make progress here too. In fact, I think we have a number of interests in common with Aboriginal people. We have a shared belief in the importance of connecting to heritage and culture. We know the impact this connection has on our sense of identity and community. When we travel through the city or country we connect the landscape in which we find ourselves with the stories of our ancestors, and we're most likely to be leading the charge to preserve graves, buildings and features which we see as integral to our history. I think it's fair to suggest we are well placed to have better than average insight into the importance of Aboriginal connections to the land, the Dreaming stories and sacred sites.

Keating described the test of how seriously we believed in a fair go for everyone as a test of 'self-knowledge' and 'how well we know the land, how we know our history'. Surely there's nobody better equipped to pass that test than us genealogists.

* I say recorded, because as a person who has SA pioneers in my ancestry. I'm guessing at least some would have taken an active role in Frontier Wars.
Posted by GenXalogy at 19:55

Email ThisBlogThis!Share to TwitterShare to FacebookShare to Pinterest
Labels: Aboriginal, Finlayson, Kriewaldt, McDermott, Point Pearce, Who Do You Think You Are?