So, a while ago I posted about the fact I had relatives in SA whose surname was Cave. At the time I made quite a joke about famous Caves, possible connections, yada yada. Anyway, after a little further investigating, it turns out that in their day they WERE famous Caves, and not the ones in Naracoorte either.

Susanna Darby, my ancestor George's sister, married Charles Cave. He had formerly been a yeoman farmer at Stoke Parsonage, these days known as The Priory. Her own father was also a yeoman farmer, in Pitney. I remember reading the excellent book about the Darbys in South Australia written by Basil Darby, who found it unusual that George and Mary could afford their own passage to SA (I believe he even used the words 'scraped together their passage'), and I had always shared the assumption they would not have been well off. Since reading about the Caves I've realised that a yeoman farmer owned upwards of 100 acres of his own land and was considered part of the middle class, which explains a lot about what happened when they got to Australia.

Stoke Priory. Not bad, hey?
George set up farming in Coromandel Valley, while his sister Susanna and brother-in-law Charles owned a farm at Sturt and a property on King William Street. Several female members of the family married prominent businessmen, one married the former aide-de-camp of Governor Macquarie, and some married regular joes (that would be my branch of the family. Typical.) Several male members of the family became prominent businessmen and public officials, including William Rendall Cave, explorer, merchant, ship owner, composer, Consul to Chile,  and all-round over achiever. Hell, he even started a wheat buying scandal decades before the AWB got in on the act! South Australian readers will see the genealogy on his Wikipedia page contains some of the most eminent names in our state. Nobody else I'm related to has ever aspired to the lofty (pun-intended) heights of owning not one but TWO mansions.

While every family has its shining light, they also have their black sheep, and it just happens in this particular branch of the family they are father and son. Yeah, that's him... near the bottom of the Wikipedia article. John Rendall Cave.

John was without a doubt educated at one of Adelaide's finest schools (*note to self - find out which schools the kids went to. Bet it's something with its own archive*), possibly succeeded his father as Consul to Chile, and would have been set up to be successful in business. He would have been given every possible advantage in life. But for what did he appear in the papers? His enormous profit margins? Civic service? Philanthropy? Being a stalwart of the Church? No: he appeared most regularly for getting sentenced to 12 months in gaol (and then avoiding serving the term) for pressuring a domestic servant to abort his child, a move which resulted in the death of the unborn baby and Antonie Hedwig Klemich, the young woman in question. 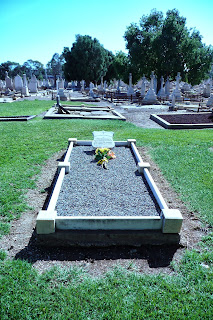 Grave of Antonie "Tonie" Klemich
The flowers were from me. I felt so bad when I read about her yesterday that I headed off to see her straight away. One thing which was something of a relief was that it seems someone has really looked after her plot. It is in pristine condition, despite being 105 years old. Antonie was not from a family of means. She 'got into trouble', and tried to remedy the situation by taking some very drastic measures. There's many a family that would have pretended not to know her on her deathbed, much less interred her with due respect. While she said that she was "very bad", it's obvious that those who knew and loved her did not feel the same way. Kudos to them for ensuring their poor darling girl received a decent burial. If this whole story reveals the despicable, exploiting behaviour of John Rendall Cave, it also shows the absolute decency of Alwyn (pronounced 'Alvin' I would presume) Klemich and his family.
To follow up, in 1930 Cave was written up in the Police Gazette for failing to provide maintenance to his wife and children. The newspaper trail clearly indicates a marriage break-down, the children staying with their mother who tragically died only seven years later.
Most of his family are buried together, but there is no sign of him. Perhaps he went to Chile? Perhaps he changed his name and moved away? Naturally I'm curious to find out what happened. I have contact details for someone I am certain would know, but what elderly person wants a phone call about their father when he's a guy like that?
Yeah... so not going to be dialling that number any time soon.
Edited to add: have heard from a relative who informs me that John formed a succession of somewhat dodgy relationships before dying in 1957 at the home of his last love interest, the woman who ran the Royal Admiral Hotel and farmed pigs at Port Adelaide. It seems somehow appropriate.
﻿
﻿
Posted by GenXalogy at 05:09